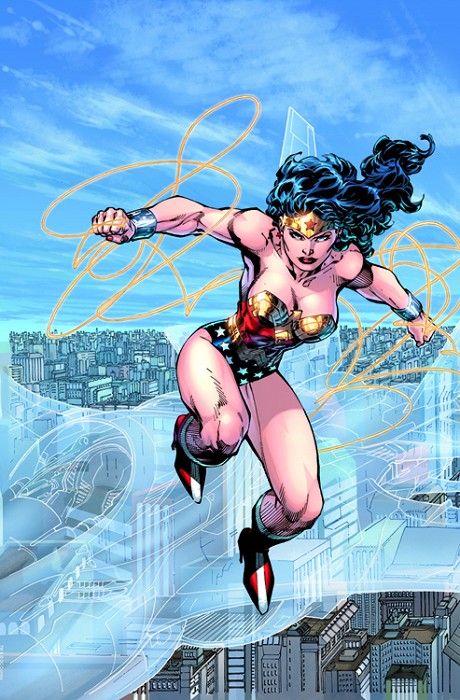 Jim Lee Trinity Wonder Woman  Giclee On Paper is eligible for layaway in 3 equal payments of $75.00 over 60 days.

As an option you may also pay for Jim Lee Trinity Wonder Woman - Giclee On Paper using Paypal or with your Amazon Account(*select items). Please note that all orders must be delivered to a physical address verified by Paypal or Amazon. These options are not applicable for orders to be delivered to Military or International destinations.
For Military APO/FPO orders please use our standard checkout. For International Delivery, please click on the International Shipping Icon to see the landed cost to your country. No Sales Tax Except In The State Of Florida.

NOTES: This is the cover art Jim Lee designed for the “Trinity” series. Wonder Woman (book #16), Superman (book #17) and Batman (book #18) each have their own cover, but the art was actually designed as a single image featuring the three Super Heroes in action. Superman, Batman and Wonder Woman lead the heroes of the DCU against the machinations of their malevolent counterparts, resulting in a cataclysmic event that will change the world – but not like anyone involved expects. This piece utilizes many of Lee’s renown stylistic cues. Lee who at one time studied to be a physician at Princeton University, demonstrates his strong knowledge of the anatomy in order to create some of the most physically imposing superheroes to date, while his cross-cut style of illustration, executed through tiny lines in the character, gives an impression that his characters are actually moving..

Trinity Wonder Woman  Giclee On Paper by Jim Lee  is signed by the artist and comes with a certificate of authenticity.