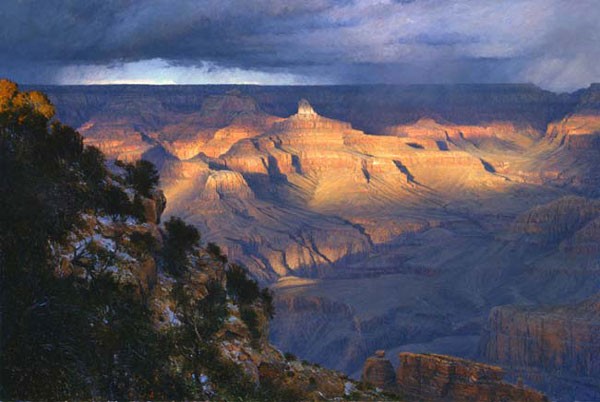 Curt Walters Suddenly Aglow MASTERWORK EDITION ON  Canvas is eligible for layaway in 3 equal payments of $750.00 over 60 days.

As an option you may also pay for Curt Walters Suddenly Aglow MASTERWORK EDITION ON - Canvas using Paypal or with your Amazon Account(*select items). Please note that all orders must be delivered to a physical address verified by Paypal or Amazon. These options are not applicable for orders to be delivered to Military or International destinations.
For Military APO/FPO orders please use our standard checkout. For International Delivery, please click on the International Shipping Icon to see the landed cost to your country. No Sales Tax Except In The State Of Florida.

NOTES: There is no vista more essentially American than the Grand Canyon and no painter better suited for it than Curt Walters, who Southwest Art Magazine
recently declared . . . conquers the Grand Canyon. With a growing pile of awards from the most prestigious exhibitions in the country ù the Masters of the American West, the Prix de West and the Quest for the West, to name a few ùCurt Walters has the best seat in the house as, brush in hand, he welcomes us into the majesty of the Grand Canyon.

When winter cold fronts approach the Grand Canyon from the northwest, says Walters, many days remain overcast and frigid. But there is a magical time in the late afternoon when the sun drifts below the cloud bank and its rays burst through the cheerless gray like a spotlight. Suddenly, the grand earthen temples are aglow in color, their rugged shapes so ornately defined. Suddenly Aglow was inspired from a moment just like that. I wish everyone could have an opportunity to see the Grand Canyon in a similar way..

Suddenly Aglow MASTERWORK EDITION ON  Canvas by Curt Walters  is signed by the artist and comes with a certificate of authenticity. 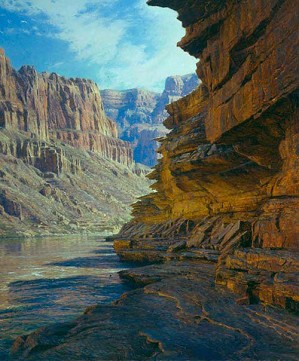 Curt Walters Ledges of the Tapeats 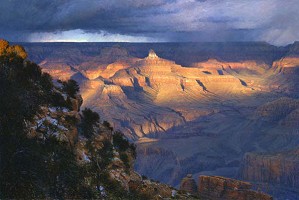