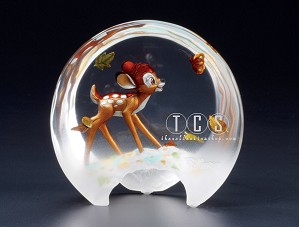 Chris Peterson Nature Is All Around Me  Mixed Media Sculpture

Chris Peterson is one of those amazing people who was born to design and create. His family recognized his talent at an early age and encouraged him to pursue a career as an artist. Chris Aunt worked at the Disney Studio on Jungle Book , Ludwig Von Drake , and the Goofy shorts. She was the first woman layout artist at Disney, where she worked mainly on Baloo . When Chris was a young boy, she would send him drawings from the different animated films she was working on. He would study each one, practice drawing the characters, and then send them back to his aunt. At the age of eight, Chris entered an art contest and won a full scholarship to an art academy. They were shocked when his father called the school to inform them that he was only eight years old. Chris Petesron continues to create many sculptures for the Walt Disney Classics Collection.